It looks like we will be able to present you a demo for the new game pretty soon.
If everything goes smoothly, it should be done shortly after this weekend.
(at least if there won't be any critical last minute bugs)

And yes, since we are working on the new game, we are obviously not adding content to Paperheads.
(especially because of all the problems with Paperheads, I've written about them in the older posts)

We also thought about changing stuff on the blog, so there will be some major changes in the upcoming weeks.
(updated links, updated header, change of categories, and I guess the old votes will be deleted, well, it will be cleaned out and brought up to date in general)
But I'll take my time in doing this, since it's not that important at the moment.


But lets get back to our new game.
We've already decided on a name, but we will keep it to ourselves until the demo will be released.

What the demo will contain:
- a completely playable stage with boss battle
- 5 CG scenes (roughly 59 pictures in total) with background
- lots of text in the CG scenes (japanese and english, you can switch the language ingame)
- effects in the CG scenes (screen shaking etc.)

There is NO sound in the game, as we have no money for music.
We also had no time yet, to do something about the SFX itself.

And yeah, it's a platformer this time.
Most of the stuff is already done, and in fact... you won't see everything we've done so far in the demo version, since we are saving lots of stuff for the full version.
(so you won't see the CG scene I've placed into an earlier post)

Currently we are working on getting everything ready for the demo release.
So please be patient, it might take longer as planned, in case unforseen stuff happens.


Here are some sketches and sprite samples, to shorten your waiting time: 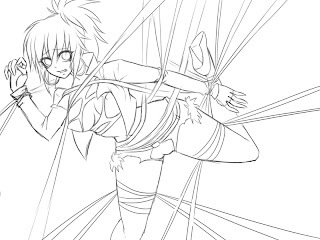 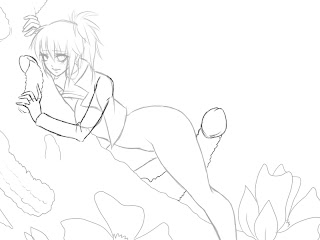 Yes, the CG drafts shown here are already done and implemented into the game/demo.
We just want to keep as much as possible for the demo release, without spoiling the surprise.
So it hopefully will be a nice present for you guys and girls.


P.S:
And sorry if I didn't respond to questions, I'm pretty much stressed out, and I tend to rush things lately.
So I might overlooked some posts/comments or questions.
Posted by Wolfenstahl at 6:02 AM 7 comments:

Well, I'm back.
The past few weeks I was moving from one place to another.
For the time being I'm going to live at a friends place, until I get a job and an appartment of my own.


But lets get to the more interesting part:

Regarding donations:
Only very few people donated so far, and we want to thank everyone for their donations.
Especially we want to thank Munchman (from ULMF forum), for his generous donation.
Thank you very much!

All the donations we got so far, really help us to continue making games, and we would be happy and grateful for every donation that is being made in the future.

It will only contain one complete stage, with all the CG's for it.
(including the boss fight etc.)
Content wise it's around 25% to 33% of the content the final game will have.

I share the rest of the details in the upcoming days.


P.S:
I know I missed a lot in the past weeks.
Paperheads had been released on english DLSite:
http://www.dlsite.com/ecchi-eng/work/=/product_id/RE111186.html