I've thought a lot about boss battles and how they should be.
somehow a boss should feel different than a regular enemy.
so I decided to leave out grab-attacks from boss battles.
the other difference would be, that when a boss starts an attack, you can't stun him by hitting him.

he will take damage, but he also will be able to continue his attack.
so the trick is to keep an eye on the bosses movement, and then react accordingly.
every attack the boss does can be avoided by different movement.
(running away, jumping, or just running up or down)
but of course you have to find out what methode of dodging is possible.

why does the boss have no grab attack?
well I think it would be better to give him several attacks, instead of a grab attack.
the grab attack somehow slows the gameplay down too much.
since boss battles should feel different and they should rather be tense, I think a grab attack is out of place.
instead they will have 2 different CG's you can unlock upon a game over.
there will also be a savepoint right before the boss battle. 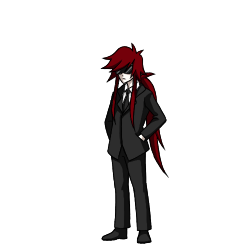 yeah, I haven't postet for quite some time.
which is pretty unusual, since I do blog-updates all the time.

the truth is, some things came quite unexpected.
like family members that have to go to the hospital for quite some time.
extra chores I've got to do in the household because of this.
and of course trying to get a new job or so.
well that aside, everything else is working out.

it just means that we have to push the release date further, because we couldn't really work on the game for about one week.
(or at least we were not able to do some major progress)
from today onwards we should be able to focus again on our work, so you'll get to see some progress soon.

regarding the matter about cutting down on the game content regarding the time limit...
well I think I'll include everything into the game I wanted to, and I'll just push the release date back until everything is done.
(though this means that the game won't be completed in august for certain, maybe end of september? well... we see about that)
at least my family accepts that I work on a game and I've got a little bit support there.
so I don't need to rush anymore.
(at least at the moment that is)

the only "cut down" stuff will be the text during CG scenes.
I already covered the explanation for this in the last blogpost.
and yup, I'll go with solution Nr. 2.


since someone asked about why we want to translate this game into japanese:
why should we not do it?
the more customers we get, the better it is.
and I guess the japanese people are very important as customers.