We've been busy working on stuff the last couple months.
Deathblight RPG of course which had it's Ferania job update a while ago, as well as our new game Deathblight Guilty Raid.
So we're confident in announcing that one now!


Deathblight Guilty Raid is basically a remake of our old game "Last Demon Hunter" which you can download on this blog for free.
However, this game is not a simple remake.

It's a complete overhaul of the previous game.
Vast increase in content:
New enemies, new skills, multiple playable characters and much more.
It's still a topdown shooter with rogue-lite elements though, but other than that it's pretty much it's own game.

Because of this we decided to name the project something else.
It's based on old LDH, but it's technically a new game.
It also features a new heroine, Safiya!
(Ferania is not planned to be in this game as of now)
And of course, since this is a proper game, the graphics are all fully fleshed out.

Here's some screenshots as previews: 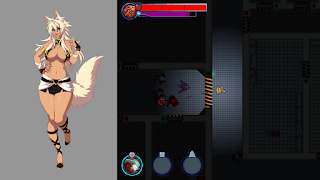 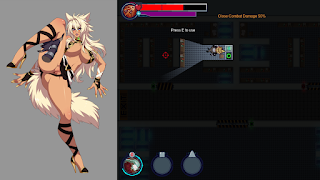 Please note that this is a WIP (work in progress) and some graphics will be enhanced or replaced for the final version.

Other playable characters planned for this project are Esmoda and Faye from Deathblight.
(you may know them from the webcomic)
So you can look forward to those two as well!

The entire project is self funded, but we plan to hand it out to Patrons of 10$ tier upwards as loyality bonus.
(only to people who are subscribed at the date of release)
We also plan to sell it on multiple platforms including Steam.
So you can grab the game on the platform of your choice once it's released.


That will be all for now, please look forward to future updates on the games progress and some reveal of game mechanics in the upcoming posts.
See ya around!