The character popularity vote just started a couple days ago.
But there's been some surprises!
Aurora suddenly dashed forwards and is now second, right behind Ferania.

Also, there's some desperate words from Esmoda, our polar bear lady:
(click on the images to enlarge) 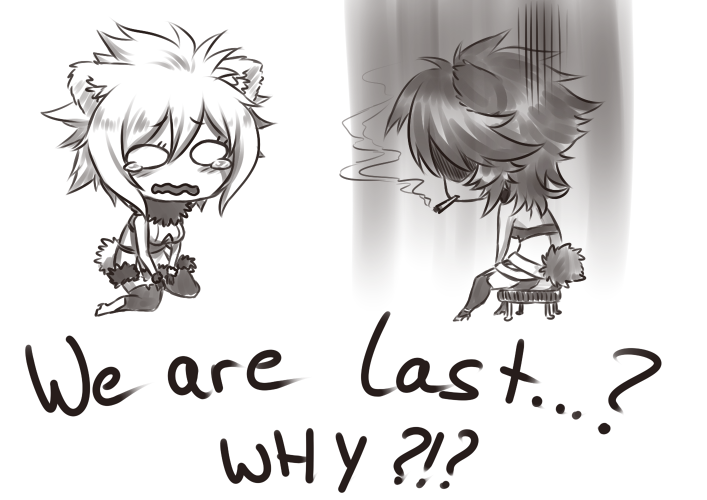 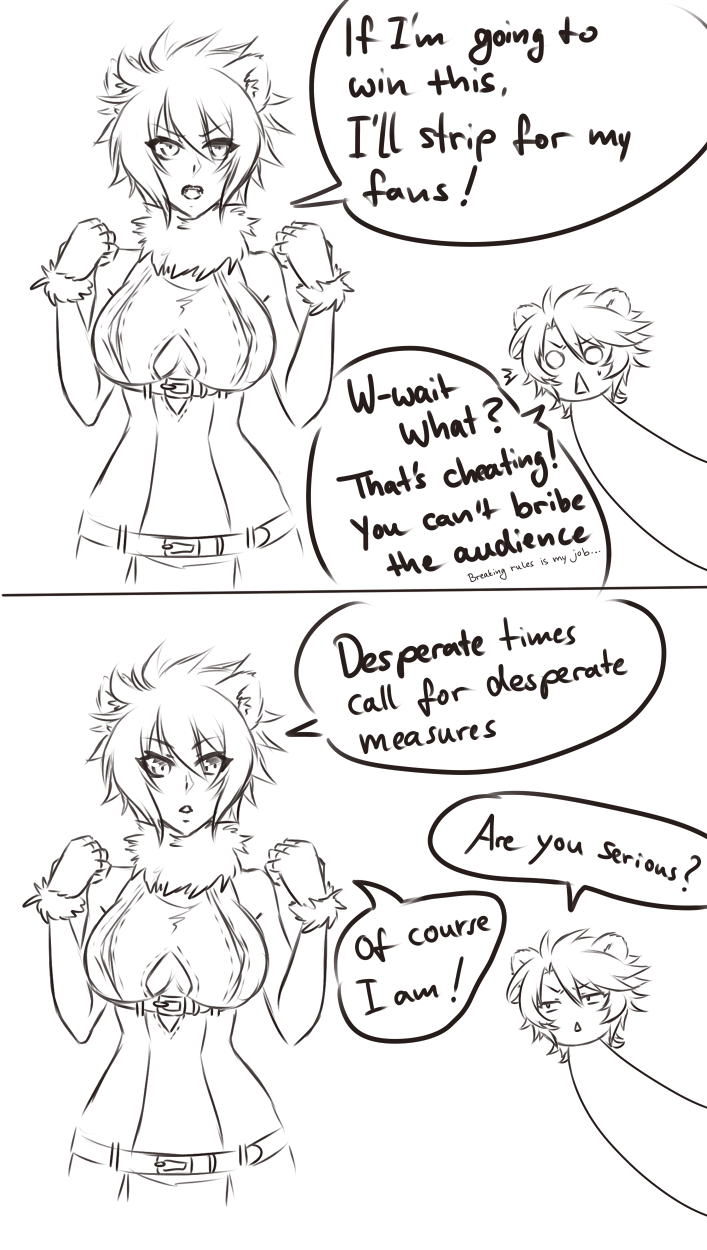 She loves challenges, and she's willing to do anything in order to win! lol


Some other important news:
The webcomic will be in colour once we start the 1st chapter with the real storyline.


P.S:
No way... this is probably my shortest post ever lol
Posted by Wolfenstahl at 6:04 PM 28 comments:

I just implemented a character list of our currently introduced characters,
(requested by Trolo)
so I thought it would be a good idea to finally do a popularity voting!

Btw. you have multiple votes!
So vote for whoever you like most.
I'll let the voting go on for at least 2 weeks.


In the upcoming days I'll do some minor changes to the blog.
Upgrading some stuff and probably upgrading the character list as well.
And yeah, I should also rework/edit all the character introductions.
(yes, ALL of them...)

The first 3 are missing some data that I introduced with the other character introductions.
And I also feel that I should keep them spoiler free as well... (because of the webcomic)
Furthermore, I did some minor changes to some things, so not all the things I mentioned in the character introductions are up-to-date. (some information is now "false"... I'll simply edit the introductions one by one in the next weeks, and I'll tell you once they're all updated!)

And yes, I figured I might write the updated stuff at the top of the introduction and leave the "old" introduction at the bottom or something...
Or should I rather simply erase the old informations?
I don't know... I'll see about that.

In case you have questions, feel free to ask in the comments.
Posted by Wolfenstahl at 8:03 PM No comments:

Some random thoughts & stuff about the webcomic

I'll get to the random thoughts later in this post.

First of all I want to thank everyone who supported us so far!
Thank you very very much!
(I can't say this often enough)


1. Stuff about the webcomic
2. Some thoughts about Patreon (and our current game)
3. About the character list and (possible) gameplay changes


1. Stuff about the webcomic:

Currently the webcomic is very much hentai-only, but we want to change this with the next chapter.
Of course, I'm avoiding spoilers in this post.

We'll jump back about 5000 years in time, into a high-fantasy setting (Orcs, Dragons, Demons, Knights, Wizards etc.), when the adventures of our main characters just started.
At first we'll focus on Ferania, Minori and Chiira, and around the end of chapter one or the beginning of chapter two we'll include Claire, Aurora and Catheline as well.
From that point on, all of our 6 main characters will be appearing in the story frequently.


2. Some more thoughts on Patreon:

Currently I'm thinking about possibilities to connect our game stuff more directly to our Patreon page.
(which is currently only for the webcomic)

We have not decided on anything yet.
But if we actually manage to make more money via Patreon, we could avoid using Offbeatr.
Which in turn would mean, that we'll save a lot of money.
(Offbeatr takes 30% of the raised money)
And yeah, if we get money, we would be able to add more characters to the game.

But of course patrons would get the newest version earlier than everyone else.
(I mean, there needs to be some sort of benefit for our supporters, and this is the least we can do)


But well, that's purely theoretical thoughts for now.
Also it's not that simple...
I mean, just because you're able to deliver some awesome content doesn't necessarily mean that you'll get the money for it. It's all about reaching a lot of people that might find your project interesting, and getting their attention for your project.

And yeah... I guess that's something I'm not good at... I suck at marketing lol
But probably it will work out somehow, someday.

We have not decided on any of this yet, but I thought I'd share my thoughts on this matter anyway.

With that many flying characters on the character list (1 dragon girl, 3 harpy girls), I thought that I should probably also change the way I think of the characters "classes" on paper.

This doesn't change anything with the characters itself, but it gives me a better overview of the whole character list. I need this because I want to have characters in the game that have different playstyles.
So I need to have a good overview in order to decide on which ones to pick.
(and yes, obviously my decisions will be influenced by popularity votes anyway)


Also I'm thinking about "maybe" doing some sort of popularity vote soon.
This will be a temporary character popularity poll with NO effect on the final list.
I'm just curious about which characters are more popular and which ones are less popular.


As always, feel free to ask questions in the comments! Crescentia drew this as a reward for our patrons.
(only the patrons get the high-resolution version)
Thank you very much to everyone who supports us on Patreon!

As I mentioned before, I thought about adding some more characters to the "possible characters" list for the game.
These characters would also get a proper character introduction.
I'll just give you a small overview of who's on the list already.

Characters that still need to be introduced:

A total of 20 characters on this list should be enough.
I think it's pretty much clear that not all of them will make it into the game.
But hopefully some of them will.

I thought it would be a good idea to inform you about how things are currently moving along.
So far, Crescentia is able to work at about 50-66% of her "usual" capacity.
Depending on how the next ~3 weeks are going, we're going to increase this to about 66-75%.
Which means, yeah, we're on a good way to pick up our old working pace!

If everything works out as planned, we will get a lot of commissions done in the upcoming weeks.
After that (probably sometime in october), we're finally going to be able to work on the game again, and hopefully we'll make some major progress.

Why we're not getting to the game right away?
Well, the thing is, Crescentias arm injury was going on for about 6 months now, and during that time we lost a lot of our savings.
So basically we're going to build up some savings again, and then get back to working on the game.
At least that's the plan.


As always, if you have any questions, feel free to ask in the comments!
Posted by Wolfenstahl at 12:21 PM 2 comments:

We're pausing character introductions for probably (at least?) 2-3 weeks.
The reasons for this is mainly because I need to work on the background story for those characters, as well as coming up with ideas how I can implement those into the game.
(some stuff simply doesn't work out in a game, and probably I need to adjust things later on anyway... however, the most important thing is to have an idea first... which I currently have, but it needs to be fleshed out)

Another reason is, this way Crescentia can focus on delivering the rewards for the Patreon campaign:
http://www.patreon.com/deathblight


As well as making some progress on commissions.
(she still can't work with 100% efficiency right now (still about ~30-40%) so things are going really slow, and yes, she still needs to take commissions as the first Patreon goal hasn't been reached yet)
(The webcomic is still going to continue as it's first chapter is being sponsored by BazookaDre!)

If we're lucky, we "might" be able to finally get that CG animation for the game done in the upcoming weeks.
And based on how it works out, we might be able to make some progress on the game.
(no promisses)

As things are looking right now, Cres needs to focus on stuff that earns her money until her arm is 100%ly healed, so yeah, until this finally happens, progress will be reaaally slow.

Our current plan is to actually add to the character list a couple more characters.
Obviously, it's impossible that all of them make it into the game.
But we thought about adding some to create more diversity (and making the choice harder... lol).

The previous list had 14 characters on it, all those that had been introduced (11 characters) plus:
- Stella (dragon girl)
- Zahra (jackal girl)
- Saraswati (tiger girl)

Well, I need to think this through.
But this is the rough plan.


As usual, if you have questions, feel free to ask in the comments!

Posted by Wolfenstahl at 1:15 PM 5 comments: