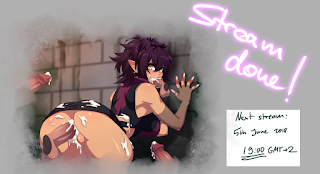 Here goes our first progress report!
The first two days on the project went very well, we've been making good progress.
Crescentia finished Francesca's dialogue graphic with all facial expressions.
As well as finished the first CG.
The second CG has already been sketched as well.
Since the graphics are made in "simple cel-shading" they are quite fast to make.
(also no "naked version" underneath, so less work than the Deathblight RPG "soft-shading" graphics)

We plan to include 3 CGs for "ingame" interaction.
As well as 3 CG scenes for different endings of the game.
So yup, this is some good progress.

In the meantime Boxman worked on pixeling the first sprites for Francesca.
Zhuan wrote the first drafts for the prologue.
Blade made some good progress on the text parser which is needed to load the text Zhuan writes into the game.
While Illustrious worked on some prototype track.

As we progress there will be more to show, so the next couple updates should have more details and information.
We hope you're looking forward to them!

Also we hired VoiceLikeCandy to do some voice acting for Francesca!
You can check her stuff out over here:
https://www.patreon.com/VoiceLikeCandy

Cres and I (Wolf) will be taking tomorrow (Sunday) and Monday off, as those days are our "weekend" basically.
But starting Tuesday we'll be back in action and doing more live streams!

See ya and take care!
Posted by Wolfenstahl at 7:16 PM